I made an exhibition video to Vantaa City Museum to their current exhibition about river Vantaa (Vantaanjoki). I was given texts, images of paintings, some photographs and an old map. Three videos was needed: the main video with texts and images, and two ambience videos - that were projected to ceiling - consisting just Ken Burns effects.

I haven't made video editing recently, although I have even taught that several years ago. Back then I was using Adobe Premiere. Now I'm on Linux (Debian) so I had to search new tools for videoediting.

First I tried shortly OpenShot and Natron. Basically, Openshot was just too simple and Natron too complex, although Natron was very interesting. I made some test with OpenShot but I had problems with jerky motion in Ken Burns effects.

I ended up to using Blender.  I was familiar with the user interface of Blender but I wasn't sure about the usefulness of Blender's VSE (Video Sequence Editor).

But making those with adjusting sliders was quite impractical. It would have been so much easier to transform and scale strips by dragging them with the mouse.

But hey, it's Blender! Surely there must be some nice trick for this. And there was: vse transform tool. And BUM! Making Ken Burns effects was easy and fun.

Shortly: add transform strip (T) to a image strip, drag and scale image strip in preview window where ever you like, add keyframes to position and scale properties of the strip, move to the end frame of the effect and do same there. Done! 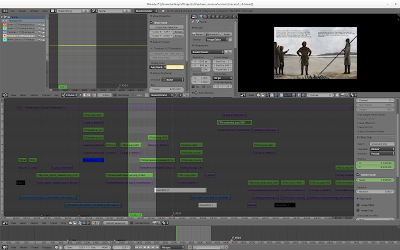 I used Gimp for making transparencies and other image editing needs. Texts I made also with Gimp. I saved texts in Gimp's own xfc format and then exported as png images. Things go smoothly when one uses the final presentation resolution from the very beginning. It is important to know the final presentation resolution in a very early stage so that you don't have remake any of your image files.

I learnt that VSE is a really capable tool for this kind of work. At least, If you know the user interface already. Otherwise there is some work to do with the basics of Blender.


PS. at 1.35 my son throws a stone to the river. He was getting bored while I was filming the ripples of the water...